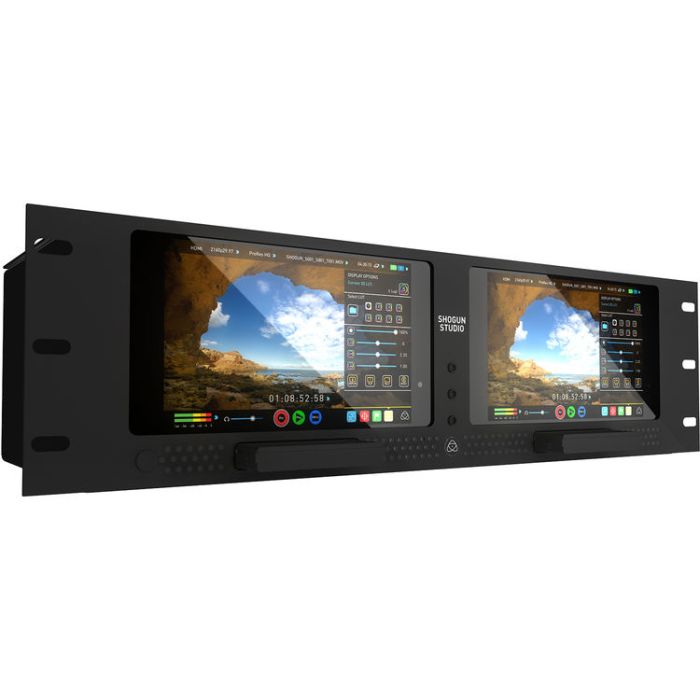 As a monitor, the Shogun features a 7" IPS capacitive touchscreen display with resolution of 1920 x 1200. It is Rec. 709 color calibrated and supports multi-frequency operation (48/50/60 Hz) for monitoring of a variety of input frame rates. An SDI loop output is available for passing the signal to an additional monitor. As an added convenience, 4K signals can be internally down-converted and output in 1080p at the same frame rate.

The Shogun Studio supports Tally function, custom 3D LUTs, Genlock In for multi-camera syncing. There are also a variety of onscreen tools to help you set up your shots, including a full waveform monitor, RGB parade display, vectorscope, focus peaking, and framing, focus, and exposure assisting tools. With two slots, one for each monitor, for a master recording caddy, you can simultaneously record the signal being fed to each monitor.

7" IPS Touchscreen Monitor with Rec. 709 Color Calibration
Each of the monitors incorporate a 7" IPS screen features a 1920 x 1200 resolution and provides a wide viewing-angle of 178° for easier off-axis monitoring. Each screen is calibrated to SMPTE Rec. 709 with 100% gamut and D65 white point, letting you monitor your colors with confidence. A standard Canon C-Log calibration is also available for use with Canon EOS Cinema cameras, so you won't have to look at flat, washed-out looking images on set. ON-the-fly re-calibration is available with the Atomos Spyder calibration tool, sold separately.

3D LUT Support
You can preview looks on set thanks to the ability to load 3D LUTs onto the Shogun. Simply load Cube files on an SSD and access via the "Display Options" button on the home screen.

HDD or SSD Storage
Record to single or raided 2.5" HDDs or SSDs for faster more reliable write speeds to manage 4K recording. A 2TB raided drive will give your over 5 hours of continuous 4K recording in 4K ProRes 422 HQ.

Monitoring Tools
The Shogun offers a comprehensive set of tools to help you set up, focus, and properly exposure your shots. These tools include a full waveform monitor, RGB parade display, luma overlay, vectorscope with zoom, and a test pattern generator for signal calibration. The monitor also provides focus peaking with multiple levels and colors, false color in two modes, and fully adjustable zebra from 0 to 100%.

Supports Video Playback
You can review what you've shot thanks to in-device video playback. The touchscreen interface allows you to navigate clips and provides softkeys to play, pause, rewind, and stop footage. Additionally, the playback will display a preview frame of the selected clip in the file browser.

4K to HD Down-Conversion
4K signals can be internally down-converted and output at 1080p resolution in the same frame rate as the input. This enables secondary monitoring on an HD field monitor, or recording a lower resolution proxy copy to a second recording device

Start/Stop Trigger
Trigger record start/stop and record time code straight from the camera with Atomos' HDMI time code trigger protocols from Sony, Canon, and other cameras. Over SDI you have full support of all protocols. You also have control over file naming, for automatic backup and version control of your footage.

Note: The SDI trigger is manufacturer-specific - you will need to select your camera make from the menu to enable

Create FCPX XML Projects
Create Final Cut Pro X XML projects in the field so you are ready to edit straight away. Favorite/reject flags in the metadata let you quickly finding and uploading the best shots into FCPX or Adobe Premiere Pro.