This is the 12x-SDI Gen2 model of the PTZOptics lineup of advanced live streaming cameras, in white, featuring a 3G-SDI output for connecting to switching equipment for broadcast conferencing. The Gen2 model is capable of 1080p60/50 recording (instead of a max of 30 fps), and streaming in H.265 and MJPEG in addition to H.264. 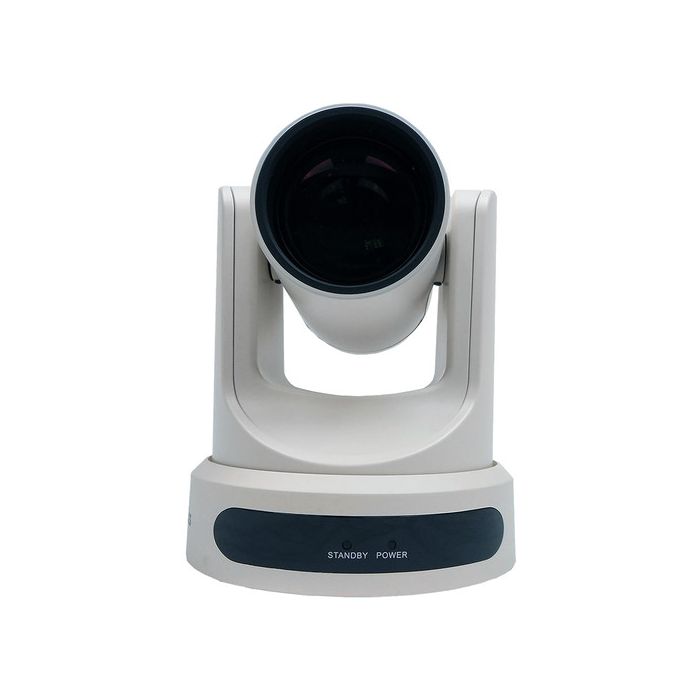 This is the 12x-SDI Gen2 model of the PTZOptics lineup of advanced live streaming cameras, in white, featuring a 3G-SDI output for connecting to switching equipment for broadcast conferencing. The Gen2 model is capable of 1080p60/50 recording (instead of a max of 30 fps), and streaming in H.265 and MJPEG in addition to H.264.

This camera has a 3.5 - 42.3mm lens providing a 12x zoom range, allowing for effective close-focus and wide-angle shots to best suit both face-to-face and group meetings. It does well in low-light conditions owing to a fast f/1.8 - f/2.8 lens aperture and minimum illumination requirement of only 0.5 lux at f/1.8. On top of this, built-in wide dynamic range and 2D and 3D noise cancellation further enhance the conferencing experience. The camera, along with its entire family of 20x and 12x models, is completely open source so developers can customize everything as they prefer using simple HTML commands.

In addition to the 3D-SDI output, the camera also has LAN, HDMI, and composite outputs, RS-232 input and output with daisy-chain capability, and an RS-485 port. The SDI, LAN, and HDMI outputs can be used simultaneously at the same resolution, which can be assigned via a dial on the rear.

The composite output can only be used by itself and at 480i/576i resolution. The LAN output is capable of streaming two H.264 or two H.265 RTSP signals, one in HD and one in SD, or a single MJPEG signal, and allows for direct distribution to CDNs, streaming services, and other destinations using only the camera. There's also a 3.5mm audio input for embedding audio into an HDMI signal or LAN stream so you can deliver both audio and video to your destination.

The LAN port can be used for streaming and control and also supports Power-over-Ethernet. As an alternative to direct streaming from the LAN port you can also connect external devices for more advanced conferencing. You'll also find a USB 2.0 port among all the connections, but this is strictly for firmware updates.

The camera can be controlled via the LAN port over a network, ONVIF over a network, and RS-232 via VISCA commands. RS-232 control includes control from any NewTek TriCaster, including any of the TriCaster Mini models. Simply connect multiple cameras to the TriCaster using DB9 cables and operate all of them from its software. A TriCaster can also be used over IP control using third-party software.

A large variety of software is supported, including most online meeting software, mobile apps for control over your network, and the advanced PTZOptics Network Control and VISCA Control applications.

An included IR remote control lets you adjust many settings via an on-screen display, allowing you to set and call presets, and control up to four cameras. You can set up to 64 presets in the camera (and up to 255 via RS-232), with a preset accuracy of 0.1°, and you can call up to 10 presets using the remote. The camera can be used desktop-mounted or ceiling-mounted, using an optional PTZOptics ceiling-mount bracket.