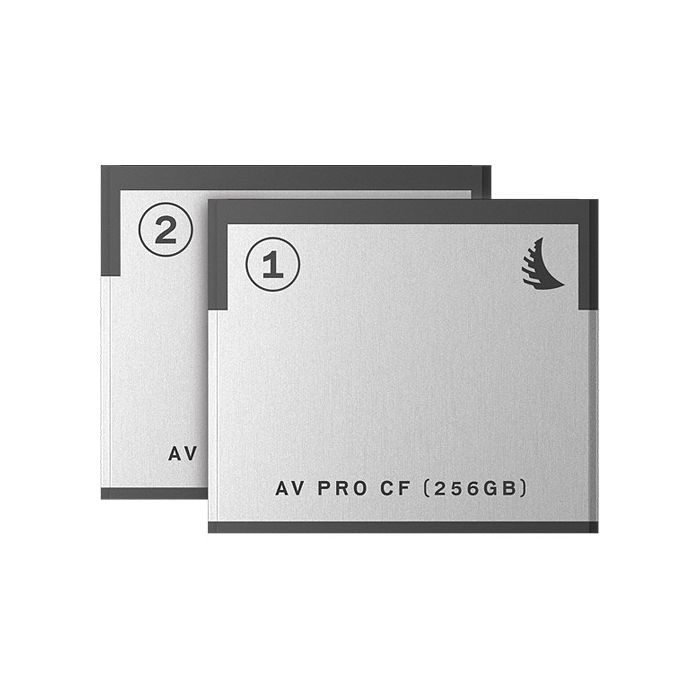 Designed for the Blackmagic Design URSA Mini, including the URSA Mini 4K, 4.6K and 4.6K G2, as well as broadcast digital film cameras, the 512GB Match Pack from Angelbird is optimized for raw and well as dual-card mode recording at resolutions of 4K and higher. This manufacturer's bundle combines two 256GB AV Pro CF - CFast 2.0 cards, for a total storage capacity of 512GB, and features sequential read speeds of up to 560 MB/s, sequential write speeds of up to 498 MB/s, sustained read speeds of up to 550 MB/s, and sustained write speeds of up to 490 MB/s using its SATA III 6 Gb/s interface. This Match Pack is qualified in-camera for enhance reliability, fast write speeds, and a low power draw to help preserve battery life.

This card has also been built with ESD & overload protection, Stable Stream technology, EDC/ ECC data reliability, ~7.6% over provisioning, a temperature sensor, TRIM, EMS protection, a built-in cache, SMART, an MTBF of 2.0 million hours, 10 years of data retention at 77°F, an operating shock resistance of 50 g, and an operating vibration resistance of 3.1 g.

While this Match Pack is protected by a limited 3-year warranty, the warranty will not come into effect unless the product is registered on Angelbird's Personal Service Portal within 30 days of purchase. If not registered within this period, the market-specific legal guarantee period comes into force. So this product may be registered, an activation code is included.

Made for URSA Mini
Not all CFast cards can live up to your expectations. Therefore, the two 256GB AV Pro CF - CFast 2.0 cards in this Match Pack were designed for use with the Blackmagic URSA Mini Pro 4K, 4.6K, 4.6K G2 and Broadcast Digital Film cameras, giving you a hassle-free experience.

Safety First
Since your creative flow should not be interrupted, Angelbird takes great care to make sure these 256GB AV Pro CF - CFast 2.0 cards adhere to the strictest reliability tests. Each card goes through an intensive data integrity test, which pushes the card to its highest performance limit. This ensures that all the data written can be successfully read back.

Optimized for Raw
The 256GB AV Pro CF - CFast 2.0 cards supports a sustained write speed of 490 MB/s. This allows you to record with all settings, including 4.6K Raw 60p in dual card mode. Angelbird also integrated their Stable Stream technology, which makes sure you will not experience any frame drops while recording.

Dual Card Mode
In this Match Pack, Angelbird put two cards of the same production batch, which makes sure recording in dual card mode will go without a hitch.